The Vanini Family preserves a history of dedication and love in the interior of São Paulo. This is your chance to get out of the city and enjoy an unforgettable day close to nature! Read the full story of the Sítio Sassafraz below and come and visit us.

The history of the Sassafraz farm began in 1888, in Sermide, near Bologna in the region of Montova in Italy. The Vanini family boarded the Vapor called “Giava” heading for Brazil in search of work, landed in the port of Santos and were taken to the hostel of the immigrants in São Paulo on March 18 of the same year. In the family there were only 06 people: the patriarch Tommaso Vanini (48), his wife Edvige Puga (41) and their four children, Cleonice (17), Primo (12), Vittória (09) and Enrico (06).

When they arrived in the interior, they were installed in the Bonfim farm in Cabreúva to work in the coffee plantations, after the working hours the family cultivated an onion patch. Decades later the youngest son of the family, Enrico Vanini, already married to Leofinia Barcele, celebrated the marriage of his son, Thomaz Angelo Vanini with Emilia Muraro, where they had five children, Iris (Uncle Idi), Edilia (Aunt Dica), Antenor (Granpa Nego), Ema (Aunt Ema) and José (Uncle Zé).

In 1951 Thomaz Angelo was able to buy land from an old slave girl named Nhá Chica Santana in Itupeva, a farm of approximately 21 hectares where Nhá Chica cultivated plants and medicinal herbs to treat the people of the region.

At the moment, the farm did not have electricity and water, it was with the effort and sweat of the family that built all the basic structure of the property and thus dedicated itself to the cultivation of table grapes Niagara, the farm was baptized Sitio Pinheirinho, due to to the great pine plantation in this area. Now our family was already older, our beloved Grandpa Nego (Antenor Vanini) married Grandma Lourdes (Maria de Lourdes Falchi Vanini) and had four children, Claudemir, Ademir, Marly and Maria Helena.

In 1981, our beloved Pinheirinho won the “Nágara Grape Producer Prize of the State of São Paulo”. The farm owned 100,000,000 grape feet and employed 10 families of wine producers producing on average 50,000 boxes of grapes per harvest.

After 24 years of hard work, planting and successful crops, in 2005, our beloved Grandpa Nego died, and Sitio Pinheirinho was divided between his sons and nephews. The territory of the back of the farm was destined the youngest daughter of the Grandpa Nego, Drª Maria Helena Vanini Polli, besides the native forest and grape vines, the only tree that remained of the original history of Sitio Pinheirinho was the foot of Sassafraz , a typical Brazilian tree in our forests of the region, giving rise to the name that is known today: Sitio Sassafraz.

Sitio Sassafraz began with a small agroindustry inaugurated on October 10, 2007, producing homemade jams and selling fruits, vegetables and cheeses for tourists and locals, in 2008 we held our first Breakfast for a scheduled group of ladies from Rio de Janeiro, since then the Sassafraz Room Breakfast has only grown, increasing our space and menu varieties. Today, in addition to our delicious Breakfast, Sitio Sassafraz also organizes corporate gatherings, anniversaries and weddings. Sitio Sassafraz also works with pedagogical tourism and receives schools from the region that seek to integrate the knowledge acquired in the classroom with the external environment.

We are through the Rural Tourism preserving a history that we are very proud to count and we hope that the people that know us also take a little of this history! 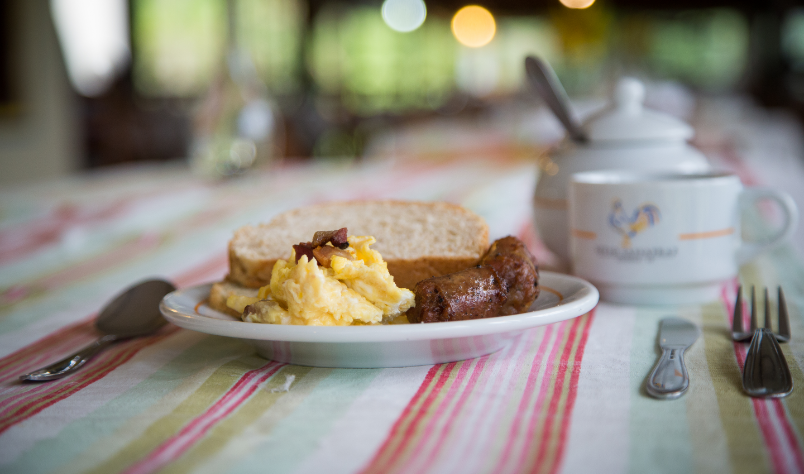 There are over 60 options of sweet and savory options for you and your family to enjoy. Our brunch has all made in the farm, where you can eat, in a self service format, on Saturdays and Sundays from 8am to 1pm.

Check the days and times